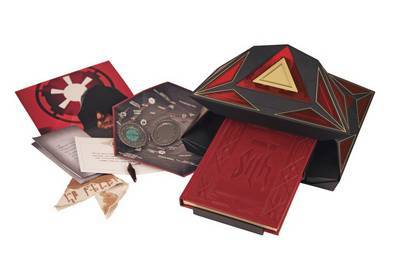 Star Wars - Book of Sith: Secrets from the Dark Side

The Sith have existed for centuries. As Sith Lords rose to power, some chose to record their philosophy, exploits, and schemes to seize control of the galaxy. When they fell, their knowledge vanished. Or so it seemed...Over the years, their writings were passed among select Sith - and even Jedi - who added their comments to the rare pages. In his quest for total domination, Darth Sidious tracked down what remained of the five most legendary dark side texts. Drawing from that knowledge, he wrote a sixth text - his own manifesto. These documents, along with several collected Sith objects, form the...Book of Sith. Within a black-and-red pyramid-shaped case, this collection has remained hidden for generations. Now with the touch of a button, all who are tempted may unlock the power and madness, and delve into the dark side...Recovered texts: A chronicle by Sorzus Syn; A war journal by Darth Malgus; A course book by Darth Bane; An instruction manual by Mother Talzin; A scientific journal by Darth Plagueis; Darth Sidious' manifesto. Removable items: A scrap of a Sith burial shroud; A battle map from the Great Galactic War; A Sith lightsaber crystal; A Nightsister talisman; A diagram detailing Palpatine's political strategies during the Clone Wars; A propaganda poster for the Galactic empire.